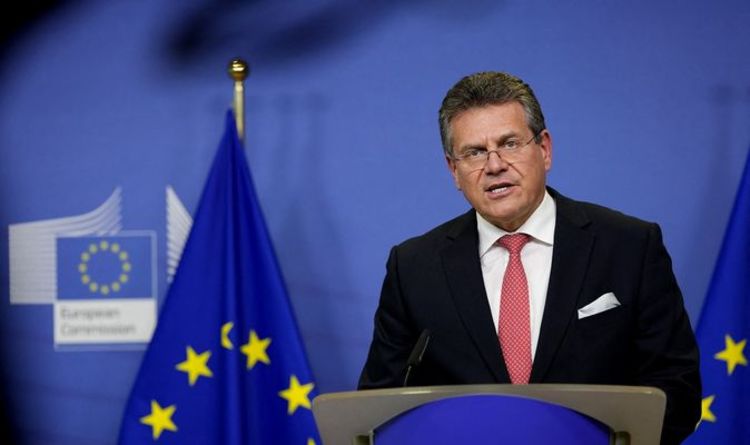 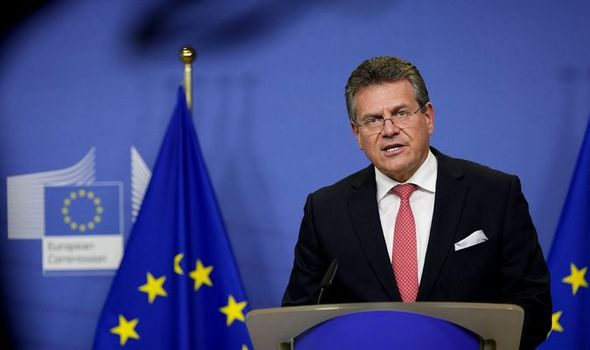 Discussions in London between Lord Frost and the European Commission are set to resume next week, and the Government has made it clear it is taking the talks seriously. However, it questioned whether the same was true of the EU’s negotiating team. The talks take place with time running out if the UK wants to invoke Article 16 of the protocol to effectively cancel it and potentially start a lengthy trade dispute with the EU.

A briefing note seen by the Sunday Express reveals that despite EU promises, the proposals being put forward by commissioner Maros Sefcovic fail in a number of areas, including measures that would block medicines coming to Ulster from mainland Britain.

The EU would also block pets traveling between mainland Britain and Northern Ireland, and while the Commission has promised to cut customs posts by 50 percent, it has not taken a single product off the ones needing to be checked.

In addition, the Government has said that a promise to reduce paperwork made by the EU is so narrowly defined that it would free up movement for very few products.

A Government source said: “We’ve always said that we’ll use Article 16 if solutions can’t be found. But people need to understand that we’re taking these talks seriously and want a negotiated outcome.

“We were encouraged by some of the statements of ambition when the Commission proposals were published in October. However, it’s a simple fact that after three weeks of talks it’s becoming ever clearer that the EU’s proposals would do very little in practice to deal with problems traders face.

“They don’t deliver what they say on the tin. The number of checks and processes would still be unacceptably high, contrary to what the Commission said when they first announced them.

“The Court of Justice would still be able to rule on laws in Northern Ireland, even though the people of Northern Ireland have no say on how they are made. If Maros Sefcovic realises that a change in the EU’s approach is needed, we’re optimistic that there is a way through this.”

Sources close to Lord Frost said he has “tried to avoid directly criticising the EU” but described its proposals as “unacceptable and inflexible”.

However, an EU ally, former prime minister Sir John Major, attacked Lord Frost yesterday and claimed the UK should not abandon the protocol. He said: “To use Article 16, to suspend parts of the protocol, would be absurd.”