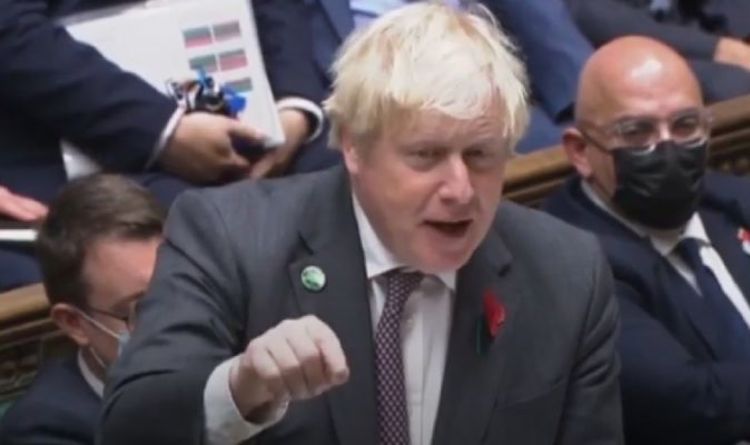 LBC presenter Natasha Devon has heard for a caller who backs Boris Johnson to win a General Election despite the Conservative Party losing their poll lead over Labour. A recent poll has placed Keir Starmer’s Labour six points ahead of the Tory Party amid an ongoing Westminster row over MPs’ second jobs. The caller described the Prime Minister as a “loveable rogue” as he backed Mr Johnson to bounce back.

The LBC caller told Ms Devon: “So he bought out the vaccines for COVID in record [time] and people very grateful for that it was a tremendous achievement of the government.

“And I do think if people are going to criticise him they should be objective and listening to Alastair Campbell who worked for Teflon Tony, maybe he is a bit jealous that Johnson is Teflon coated as well.

“But if there was an election tomorrow, I think Johnson would certainly win.

“Majority of 80 seats, many of them Labour constituents, tremendous achievement.

“The guy is just a bit of a lovable rogue, I’m afraid.

“And all this morality, I think the media has arrogated to themselves the position of Her Majesty’s Royal Leader of the Opposition, in the absence of an opposition that is very effective.

Ms Devon asked: “Well, you’ve caught him a lovable rogue what would he need to do? In order for you to think he’s crossed over from rogue into something more egregious and something more dangerous

Curtice: Boris Johnson in 'weak position' in the polls

It comes as a poll by Savanta ComRes for the Daily Mail put Labour six points ahead of the Conservatives in a sign that recent revelations about MPs’ second jobs and the handling of the Owen Paterson affair could hurt Boris Johnson’s party at the ballot box.

The results, in which the Tories dropped four points and Labour climbed five since a similar poll a week ago, are based on a survey of more than 2,000 people in the UK, conducted on Thursday and Friday.

YouGov polling published on Friday and carried out this week also suggested the Tories had lost their lead, with its findings putting Mr Johnson and Sir Keir Starmer’s Labour Party neck and neck on 35% of the vote share.

Speaking before the Savanta ComRes’ results were published, the Prime Minister had rejected suggestions the sleaze allegations being levelled at his party could be reflected at the ballot box in forthcoming by-elections.

The Conservative leader insisted the strength of the local candidate in the Old Bexley and Sidcup constituency meant voters would back the Tories in the December 2 race.