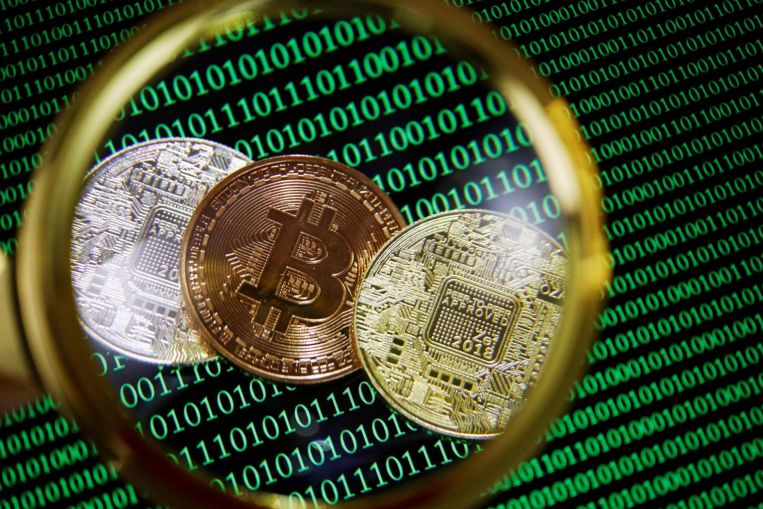 SINGAPORE (BLOOMBERG) – Cryptocurrencies fell on Tuesday (Nov 16), with Bitcoin sliding towards the US$60,000 level and Ether touching one of its lowest levels this month. Bitcoin, the largest digital token, was down 4 per cent, at about US$61,400, after noon in Singapore.

Second-ranked Ether slid as much as 6.8 per cent. The market value for cryptocurrencies globally has dropped some 7 per cent in the past 24 hours to US$2.8 trillion (S$3.8 trillion), according to crypto tracker CoinGecko.

“We’ve seen the US infrastructure bill get signed, which has initiated a sell-off from traders who are concerned about regulation and taxation,” said Mr Hayden Hughes, chief executive of Alpha Impact, a platform that allows investors to copy the strategies of other crypto traders.

He also cited concerns about China continuing its regulatory crackdown. The country will study the option of levying punitive power prices for companies that are involved in cryptocurrency mining, National Development and Reform Commission spokesman Meng Wei said at a press conference.

New tax reporting requirements for digital currencies are part of the US$550 billion infrastructure bill that United States President Joe Biden just signed into law. China, meanwhile, has imposed a broad crackdown on the crypto industry over many months, in part due to the power consumption and potential environmental fallout of Bitcoin mining.

Bitcoin has more than doubled this year, while Ether is up about sixfold. Both scaled records last week amid a fervour for digital assets driven by speculative demand and controversial arguments that they can hedge inflation risks.

Some technical indicators had suggested the strong run in cryptos was due for a pause. Digital tokens are in any case notoriously volatile. It “would be unusual to keep moving up without corrections”, said Mr Vijay Ayyar, head of Asia-Pacific with crypto exchange Luno.

He argued that “we’re seeing a healthy pullback” after a prolonged rally.