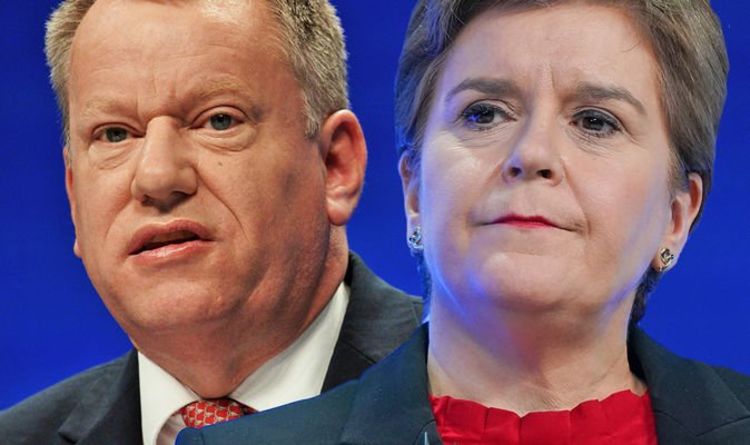 Angus Robertson, Cabinet Secretary for Constitution, External Affairs and Culture in the Scottish Parliament, issued an incredible attack on Lord Frost in a bombshell letter today and claimed triggering Article 16 of the Northern Ireland protocol, would be “economic vandalism”. In the letter, addressed to Lord Frost, Mr Robertson demanded the minister convene a meeting with the devolved nations and criticised the peer for his approach during negotiations. However, in response, Scottish Conservative Shadow Constitution Secretary Donald Cameron accused the minister of “grandstanding”.

Speaking to Express.co.uk, he said: “The SNP should be fully focused on our recovery from Covid, rather than continuing to grandstand over constitutional issues.”

Mr Robertson also admitted his concern over the lack of progress made between the two sides, despite the EU admitting a change of tone from the UK last week.

In a further brutal attack from Mr Robertson, he accused the UK of taking an “ideological and confrontational approach” with the EU.

He said: “I am increasingly alarmed at the continued lack of progress in the talks between the UK Government and the European Union in respect of the Northern Ireland Protocol.

“While your statement on Friday following your meeting with Vice-President Šefčovič refered to a constructive spirit, it provided little if any reassurance that a positive way forward would be found.

“This has the potential to cause yet further great harm to Scotland.

“It seems barely believable that the UK Government is now contemplating an action – the triggering of Article 16 of the Northern Ireland Protocol – that could result in a disastrous trade dispute with the EU which would clearly hold back recovery from the pandemic.

“That would be a further act of economic vandalism at the worst possible time.”

JUST IN: EU caves! Frost on brink of victory as bloc sees route out of issues

He added: “It is critical that the UK Government responds constructively to the EU’s new proposals on the Protocol, and that Devolved Governments are now meaningfully engaged and their views heard.

“Almost every aspect of life in Scotland is affected by the UK’s Trade and Cooperation Agreement with the EU and by the wider EU-UK relationship.

“Both are now imperilled by this dispute over a Protocol which the UK Government itself negotiated and signed up to only two years ago.

“In the meantime, I do urge you to grasp the opportunity of the ongoing talks to find durable solutions.”

Despite the comments from the Scottish minister, the EU has claimed talks have reached a more positive tone.

He also claimed the UK’s delay over triggering Article 16 had created a window of opportunity for negotiations.

He said: “There’s a real opportunity to try to make some progress on medicines, in particular, this week, and then use that as a basis to build trust to try to solve other issues as well.

“We think some of the problems can be solved quickly, which could actually generate some momentum in this talks process.

“Some of the other problems will take a little longer because they are technical and complex, around customs codes and so on.

“But look, there is no doubt that if both sides wanted to, and are focused on making progress, that we could get these issues resolved before Christmas.”

Talks will continue between Lord Frost and Maros Sefcovic on Friday.