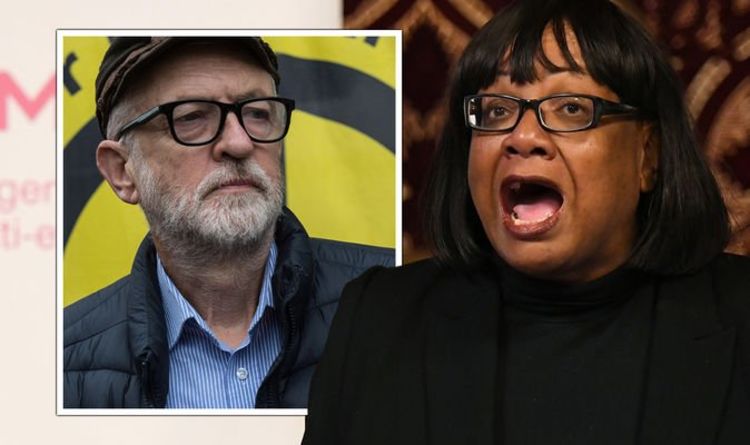 The former Labour leader had his whip removed in October 2020, meaning he could no longer sit as a Labour MP. A resurfaced video of the current Labour leader has triggered renewed calls for the Mr Corbyn’s position in parliament to be restored.

In the video, posted on Twitter, Sir Keir “pays tribute to Jeremy Corbyn”.

He said: “[Jeremy Corbyn] led our party through some really difficult times.

“[He] energised our movement and… is a friend as well as a colleague.”

Sharing the video with her followers, Ms Abbott said: “If [Sir Keir] believes what he was saying, why doesn’t he restore the whip to Jeremy Corbyn and bring him back into the Parliamentary Labour Party?”

However, Sir Keir’s comments were delivered months before Mr Corbyn had his whip removed in the first place.

The clip was taken from the speech Sir Keir gave following his election as Labour leader in April 2020.

Since this time, he has made numerous attempts to distance his leadership of the Labour Party away from that of Jeremy Corbyn.

Mr Corbyn was suspended from the Labour Party, of which he had been a member for 55 years, in October 2020.

This came after the former Labour leader responded to a report by the Equalities and Human Rights Commission (EHRC) which claimed that, partly under his leadership, Labour “did not do enough to prevent anti-Semitism and, at worst, could be seen to accept it”.

Less than an hour after the report was published, Mr Corbyn published a statement which said anti-Semitism was “absolutely abhorrent”.

He added: “The scale of the problem was also dramatically overstated for political reasons by our opponents inside and outside the party, as well as by much of the media.”

Sir Keir, by then the leader of the party, responded with his own comment, stating that those who claim the issue of anti-Semitism in Labour has been “exaggerated” are “part of the problem and… should be nowhere near the Labour Party”.

Mr Corbyn was reinstated as a Labour member 19 days later, but was told by Sir Keir that he would not return as a Labour MP.

He said: “Jeremy Corbyn’s actions in response to the EHRC report undermined and set back our work in restoring trust and confidence in the Labour Party’s ability to tackle anti-Semitism.

“In those circumstances, I have taken the decision not to restore the whip to Jeremy Corbyn. I will keep this situation under review.”