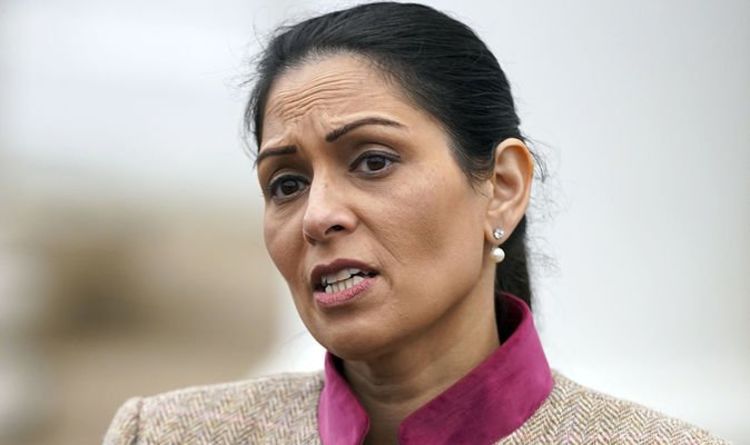 Official data indicates more than 25,600 people have so far made the treacherous crossing over the Dover Strait in 2021. The figure is more than three times the total for the whole of last year, with fears many more will still make the journey before December 31.

Frustrated MPs were yesterday demanding Ms Patel get on top of the situation, describing it as a “national emergency”.

Meanwhile, No10 was unwilling to say the Home Secretary had done a good job over the situation.

Asked if Boris Johnson was happy with the Witham MP’s record today, the Prime Minister’s official spokesman twice declined to offer up praise.

He said Mr Johnson had “confidence in the Home Secretary” but would on stopping Channel crossings would only go so far as to say she had “worked extremely hard and no one can doubt this is a priority for her”.

Downing Street is placing Ms Patel in an “incredibly difficult position”, one minister told The Guardian, defending the Home Secretary.

The ally added that there was “immense pressure” on her to solve the problem despite no obvious solutions.

Ms Patel has repeatedly said the Government’s Nationality and borders Bill, currently passing through Parliament will play a big part in tackling the problem.

But Tory MPs last night feared the Government was guilty of putting too much hope on a single piece of legislation.

They are worried there is no plan for if the new laws fail to have the impact the Home Office hopes for.

Senior backbencher Sir Edward Leigh accused the Home Secretary of having “lost control” of the situation.

He told the Commons: “We told the people at the referendum, us Brexiteers, that we would take back control.

“It’s clear that in this we have lost control.

“If you tell the most desperate economic migrants in the world that we will provide a free border service, taxi service across the Channel, we will never deport you, we will put you up in a hotel as long as you like, is it any wonder that more and more come?

“This is now a national emergency.”

He called on the Home Secretary to consider an “emergency powers act to override the Human Rights Act if necessary” as a backup plan.

Ms Patel responded by saying the Nationality and border Bill would help “around asylum, around processing, around deportation, around fast-tracked removals, and importantly, around making sure that we break the business model of those traffickers who are smuggling people into the United Kingdom.”

She added: “These changes are pivotal to absolutely bring a comprehensive reform to the entire system.

“There is no single solution to this and that is why this Bill is so important.”