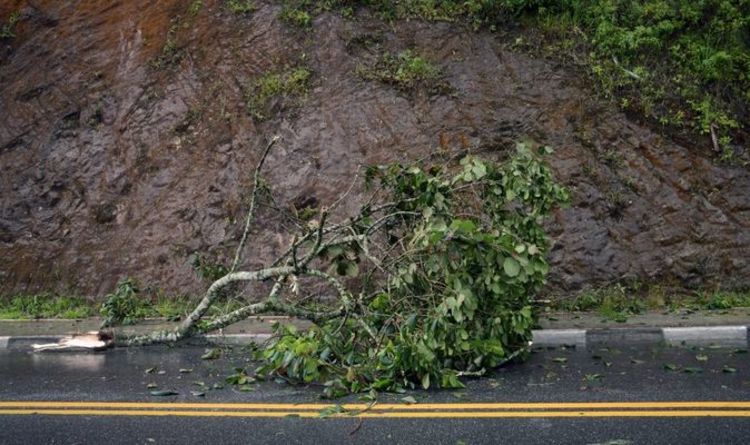 Friday 26 and Saturday 27 November are currently under a yellow warning issued by the Met Office as meteorologists have forecasted heavy winds which are set to disrupt the nation over the weekend. The gales will be coupled with rain moving south on Friday followed by showers which will be wintry at times and continue through Saturday, according to the weather agency.

The Friday warning currently covers Scotland, Northern Ireland and the Northern part of England while Saturday’s gales are expected to impede the whole country.

The Met Office said there’s “potential for a spell of very windy weather across much of the UK during Saturday.”

Isaac Longley, a meteorologist from AccuWeather, confirmed a strong low-pressure system will drop southward into the North Sea from Friday into Saturday, bringing very strong and damaging winds, especially to Northern and Western portions of the UK.

Mr Longley told Express.co.uk: “Winds can gust as high as 60-70 mph (100-110 kph) across Northern Ireland, western coastal Scotland, eastern Scotland and northeastern England with gusts of 50-60 mph (80-100 kph) expected for the rest of the UK.

“Winds of this magnitude can certainly disrupt travel and lead to power outages and transportation delays.”

The Met Office predicted delays to various modes of transport, including road, rail, air and ferry.

Brits should also prepare for potential damage to buildings that could result from incidents like roof tiles being blown from homes.

The possibility of power cuts could also affect services such as mobile phone coverage.

There is also a small chance of road and bridge closures.

Travel operators such as Logan Air have issued warnings to passengers ahead of the weekend.

Logan Air’s email to affected customers said: “In view of the forecast high winds Friday 26 and Saturday 27 across the UK and potential for travel disruption, we are offering customers the opportunity to adjust travel plans without charge.”

Customers were being offered the opportunity to re-book their travel for next week in anticipation of winds that the airline said could affect flights from Friday.

Meteorologist Isaac Longley forecasts the stormy pattern to continue into the following week with the potential for more strong winds and showery spells.

He told Express.co.uk: “A cold front is forecast to drop Southeastward across the UK on Wednesday, bringing strong winds, especially to Scotland, with blustery showers north but generally dry in Southern England.

“A fresh to strong wind will stick around for Thursday, but many spots will be dry.

“A strong low-pressure system will then drop southward into the North Sea from Friday into Saturday, bringing very strong and damaging winds, especially to Northern and Western portions of the UK.

“At this point, it appears we will remain in a stormy pattern heading into the following week with the potential for more strong winds and showery spells.”

Until then, Wednesday 24 and Thursday 25 are set to be getting colder with occasional blustery showers punctuated by sunny intervals.

There is also a possibility for snow and sleet as cold air keeps moving in from the Arctic.