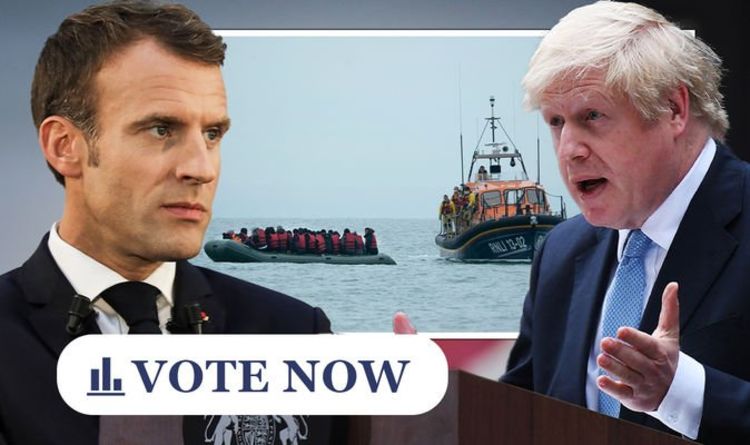 Boris Johnson speaks after deaths in the Channel

Home Secretary Priti Patel has proposed that British forces be sent to the shores of France to patrol the sea for illegal crossings, in the wake of the tragic loss of 28 people who had attempted to travel to the British coastline in a dinghy boat which capsized. Among the 28 found dead were seven women, one of whom was pregnant, as well as three children. Two people were rescued.

A fishing boat sounded the alarm on Wednesday afternoon after spotting several people in the sea off the coast of France.

French and British authorities are now conducting a rescue operation by air and sea.

The International Organisation for Migration said it was the biggest single loss of life in the Channel since it began collecting data in 2014.

Four people have been arrested near to the Belgian border, France’s interior minister Gerald Darmanin said: “We suspect that they were directly linked to this particular crossing.”

He added: “This horrible tragedy affects us all, the response must be international, coordinated, and very severe, in order to prevent more like it.

Mr Johnson said the deaths were a “disaster”, adding that it was vital for the UK and France to “step up” and “work together” to “break” the people trafficking gangs which he said were “literally getting away with murder”.

He also admitted efforts so far to stop the flow of migrants crossing the Channel in small boats “haven’t been enough” and that the UK would offer to increase its support to France.

The UK has pledged to give France €62.7m (£54m) during 2021-22 to help increase police patrols along its coastline, boost aerial surveillance and increase security infrastructure at ports.

The Prime Minister said: “Our offer is to increase our support but also to work together with our partners on the beaches concerned, on the launching grounds for these boats.

“That’s something I hope will be acceptable now, in view of what has happened.”

He added: “We’ve had difficulties persuading some of our partners, particularly the French, to do things in a way that we think the situation deserves.

“But I understand the difficulties that all countries face, but what we want now is to do more together, and that’s the offer that we’re making.”

Sky News Political Editor Beth Rigby said Boris Johnson was implying that the French hadn’t been as helpful as they could have been in trying to stop boats being launched.

Who do you think is to blame? Vote now.

This comes after shocking footage has exposed French police watching refugees entering the waters from afar.

Downing Street said Mr Johnson and Mr Macron agreed, late on Wednesday, on the importance of working closely with neighbours in Belgium and the Netherlands, as well as other European countries, to tackle the problem before people reach the French coast.

More than 25,700 people have made the journey across the channel this year, according to data compiled by the Press Association.

And 98 percent of those who reach the shores claim asylum after travelling from war-torn countries such as Afghanistan and places with severe poverty.

The French President said: “Our law-and-order forces are mobilised day and night, not yesterday or the day before yesterday, right from the beginning they are at the borders.

“France has never had as many police officers and as many military who are mobilised and try to fight against illegal immigration at the Spanish, Italian, Belgian borders as well, and we carry on doing so, and our mobilisation is total as far as our coasts are concerned.”

He added: “We are going to have extra reserves because after all we are going to ask for extra help from the British because all these men and these women don’t want to stay in France – we tell them they’re obviously able to do so.”

Mr Macron also said efforts would be made to target the human traffickers often charging migrants £1,000 for a seat on a vessel.

Some rights groups said tighter surveillance was pushing migrants to take greater risks as they sought a better life in the West.

“To accuse only the smugglers is to hide the responsibility of the French and British authorities,” said l’Auberge des Migrants, an advocacy group that supports refugees and displaced people.

In an interview with Sky News, Policy Manager at the Joint Council for the Welfare of Immigrants, Zoe Gardner, said: “We just heard, very disappointingly, from the Prime Minister, that his intention is to just plough on with the same failed approach that we’ve been pursuing for 30 years, and it obviously hasn’t worked.

She added: “This is the time for the Government to stop, turn around, and completely change their approach, pull its head out of the sand and give people ways to travel to the UK for the purpose of seeking asylum safely. Take them out of the hands of those smugglers.”

When asked what Ms Gardner thinks of Ms Patel’s statement that she “will make the route unviable” for immigrants, Ms Gardner said militarisation will only make the route more dangerous for asylum seekers and is unlikely to reduce the numbers who attempt to cross.

Stay up to date with Brexit, the SNP and news from Number 10 by signing up for the free politics newsletter here: newsletter-preference-centre