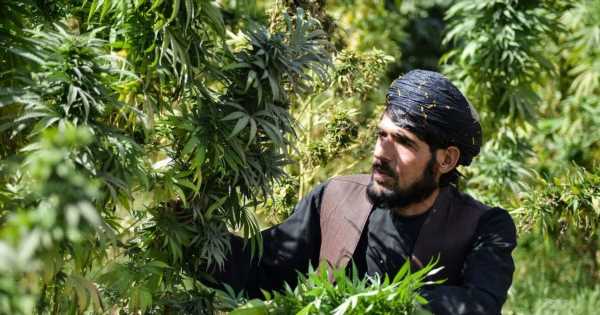 The Taliban has signed a multi-million-pound drug deal selling cannabis in their first trade agreement since seizing power in Afghanistan.

They said they plan to open a processing plant to sell "all cannabis products" and will start within 'days'.

The drug is illegal in the country, but authorities are said to turn a blind eye in favour of the profits.

Two tweets from Taliban spokesman Qari Saeed Khosty appeared to confirm the deal, writing: “The company wants to build a cannabis processing plant in Afghanistan, which will create all cannabis products.”

“The company is set to invest $430 million in this sector. This project will officially start in the coming days.”

It comes after the Taliban vowed to ban drug production after regaining power in violent scenes in the summer.

However, there was confusion after the pharmaceuticals firm that the Taliban claimed to have struck a deal with was forced to deny it.

It was reported the Australian firm that produces cannabis-derived medicinal cream would be part of the agreement.

It was claimed Cpharm would be given access to thousands of acres of Afghan cannabis crops in exchange for £330,000,000, according to The Times.

However, a story from SBS News in Australia today (November 25) said the surprise announcement was in fact a mix-up.

Cpharm director Josie Gabites as saying: “Nobody from here has met with anybody. It has nothing to do with us”

“We have nothing to do with the Taliban or with cannabis. And we have no idea where this has come from.

“There is no connection between us and the Taliban or cannabis.”

Australian companies are banned from trading with the Taliban under official trade sanctions.

The Islamist organisation had previously claimed it would take a 'zero tolerance' approach to drugs upon assuming control of the battle-torn nation, which is also world's producer of the opium poppy plant.

Farmers in the Helmand and Kandahar provinces have been farming cannabis and opium for several years, and continue to be openly trading with the arrival of the new regime.

Data from the United Nations Office on Drugs and Crime show that opium exports from Afghanistan increased to record levels after the US-led coalition invasion of the country in 2001.