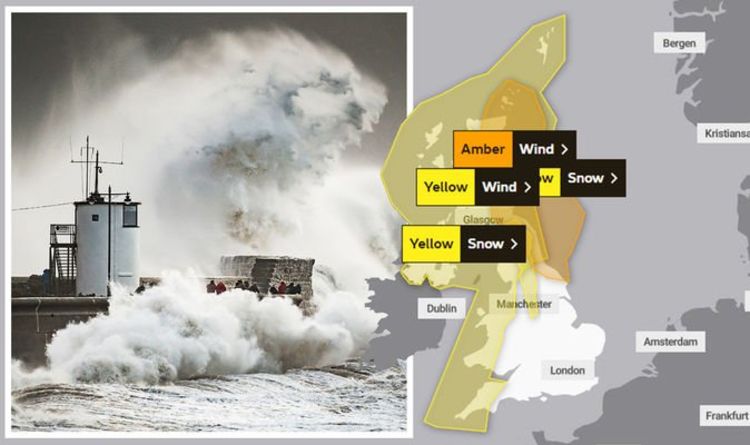 Due to Storm Arwen, the Met Office has issued a yellow weather for snow from 5pm on Friday until 10am on Saturday. The warnings for snow are expected for the central belt of northern England and parts of central and eastern Scotland today. Three yellow warnings for snow and ice have also been issued for Saturday due to the heavy band of weather hitting the UK with parts of Scotland seeing the mercury fall to -4C.

The weather warnings apply to Oxford and other parts of the outskirts of London.

Areas of Manchester and further north will also see snow while northern Scotland will continue to be blanketed by heavy snow levels on Saturday.

Temperatures will plummet on Friday due to Storm Arwen.

According to graphs from WXCharts, temperatures across the country will struggle to rise above 5C (41F) on Friday.

London and parts of the south coast of England will see the mercury struggle rise above 4C (39F).

Parts of the North of England and the Midlands will see the mercury remain at 3C (37F) on Friday.

Further North, the forecasters predict temperatures will fall to freezing on Friday afternoon due to Storm Arwen.

In line with the weather warnings in Scotland, temperatures will fall to -2C (28F) in the Highlands of Scotland on Friday.

On Saturday, temperatures across England will range between -4C to 2C.

In Scotland, the Highlands will experience the mercury dropping to -4C on Saturday afternoon.

Stephen Dixon, a Met Office spokesman, said: “Storm Arwen has been named on the back of a deep low-pressure system moving to the northeast of the UK, which has brought about our amber wind warning.

“The worst affected areas will predominantly be on the coasts, with gusts of over 75mph bringing possible disruption to travel and longer journey times, power cuts, flying debris and large waves.”

The Met Office predicts Northern Ireland, Scotland, Wales and parts of the Southwest and North of England will see strong residual winds from Storm Arwen.

The weather is being caused by a front rolling in from the North Sea.

Due to the band of weather hitting the country, temperatures are expected to plummet over the next 24 hours.

Simon Williams, breakdown specialist at the RAC advised commuters of dangerous driving conditions across the UK.

“Drivers need to make sure that strong gusts don’t take them by surprise.

“It’s important to adjust your driving in windy conditions by slowing down, being careful when passing high-sided vehicles on exposed stretches of motorway and keeping a firm grip on the steering wheel.

“Drivers should remember to give extra space to cyclists and motorcyclists when overtaking.

“In extreme windy conditions, bridges may also be closed and trees may fall so allow extra time for journeys.”