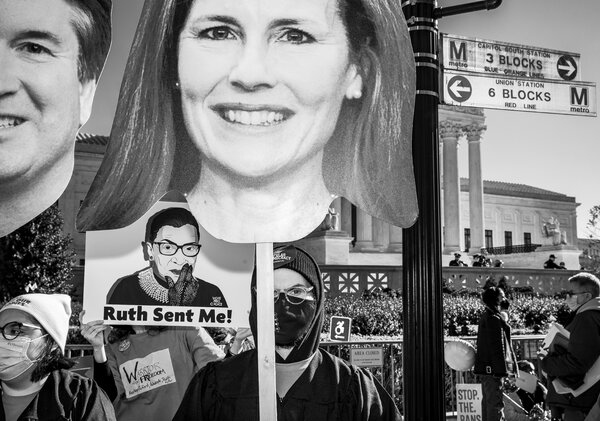 The oral arguments before the Supreme Court in Dobbs v. Jackson Women’s Health Organization, which involves a Mississippi law that bans nearly all abortions after 15 weeks of pregnancy, may give an indication of the future for access to the procedure, and for national politics. The Times columnists Michelle Goldberg, Charles M. Blow and Ross Douthat and the Times Opinion podcast host Lulu Garcia-Navarro gathered to discuss what they heard at the court on Wednesday, where they see it heading and how they, and the country, will continue to wrestle with the issue of abortion.

Michelle Goldberg: I don’t think there’s any doubt that this court is going to uphold the Mississippi law. To me the only question is whether it overturns Roe v. Wade altogether, or comes up with some new standard to replace viability, an outcome Chief Justice John Roberts seemed to be groping toward. My guess is it overturns. What do you all think?

Lulu Garcia-Navarro: I agree, all the justices showed their cards and their thinking on this issue. What fascinated me was how plainly the liberal justices — mainly Stephen Breyer and Sonia Sotomayor — spoke about the politics of this issue. Justice Sotomayor’s comment about whether the court can “survive the stench” of overturning Roe was almost a direct appeal to Chief Justice Roberts, who has been vocally worried about how the court is viewed since the conservative majority has taken over.

Ross Douthat: Yes, it’s a peculiar situation where everybody assumes (rightly, in my view) that none of the conservative justices think that either Roe or Casey was rightly decided, so the question then becomes to what extent do they act like politicians — something Roberts especially is always ready to do! — as opposed to just following their legal convictions.

Charles M. Blow: I’m not enough of a court watcher to make that call, but it was interesting to listen to the liberal justices warning against it, heavily referring to the damage overturning Roe would do to the legitimacy of the Supreme Court. They rightly described the court as an institution that does not exist above public perceptions but depends on them. Without public trust the institutional damage is fatal.

Garcia-Navarro: I’ll just note that what several of the justices said in their hearings for confirmation about upholding precedent and settled law seemed not to be in evidence in this hearing.

Douthat: To the extent there was any “tell,” I suppose it would be that Brett Kavanaugh, whose vote is presumed necessary to secure some sort of compromise ruling short of a full overturn, declined to join Roberts in probing for the possibility of a compromise. I don’t rule out a compromise, relying on a revised undue burden standard that draws a line at 15 weeks instead of viability — but I don’t think the questions from the non-Roberts conservatives suggested that it’s particularly likely, and they did suggest reasons that it would be deemed unworkable.

Goldberg: Kavanaugh certainly didn’t display any openness to a compromise that would uphold Roe. Instead he emphasized all the times that overruling precedent served the cause of justice. I suppose there’s a tiny — and I mean really tiny — consolation in that he seemed unwilling to entertain extreme right-wing arguments that the Constitution prohibits abortion, as opposed to being neutral on it.

Douthat: The challenge is that when you have the court try to settle a controversial culture war issue, as it did using different frameworks and theories in Roe and then Casey, and none of its attempts at settlement actually make the issue go away and instead just make Supreme Court nominations central to our politics in a way they weren’t before, the problem of “institutional legitimacy,” as Charles mentioned, is there no matter what the court decides.

The abortion debate has already transformed the court into more of a perceived partisan actor than it previously was. I don’t know how much that changes if Roe is overturned — maybe it makes high court politics worse, or maybe we end up with polarizing legislative and congressional debates and the court recedes a little bit.