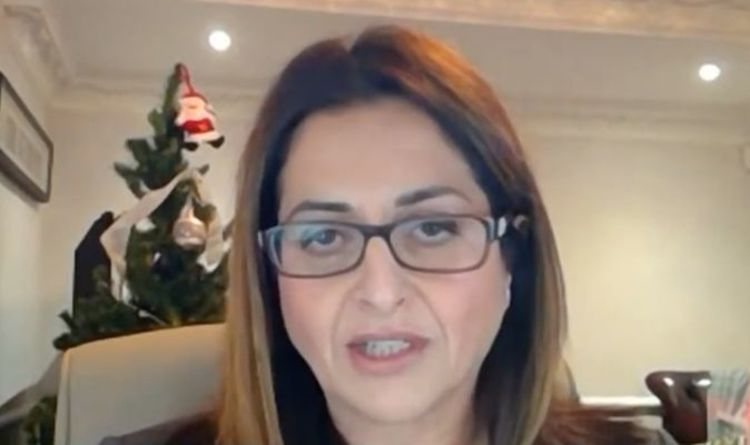 British travel industry boss Julia Lo Bue-Said has warned the sector risks “falling off a cliff” after France imposed travel restrictions on travellers from Britain on Thursday. The CEO at Advantage Travel Partnership was invited onto GB News to discuss the impact of the French ban on non-essential travel. She called on Boris Johnson’s Government to provide financial support to help struggling businesses.

Ms Lo Bue-Said told Nigel Farage on GB News: “This is you know, absolute hammer blows for an industry that’s already been suffering.

“I heard you talking about hospitality but if you look at the travel sector, we’ve not traded properly for 20 months there have been consistent restrictions.

“So, the week that school holidays break up, you’ve had families that are looking to be reunited with friends and family in France, ski holidays, all sorts.

“Absolutely devastating time for travellers and for businesses operating in the travel sector.

Mr Farage asked whether the French were acting “unnecessarily hastily” in bringing in the restrictions.

She replied: “I think the way that we are looking at it is actually it’s the British government to help us.

“You know, the decisions that the French make, we can’t control and actually given the situation we’re in the British government needs to put the hands in their pocket.

“They’ve not done so today for the travel sector specifically, and help an industry that is absolutely on the brink of falling off the cliff.”

It comes as a British business owner lashed out at President Macron and warned the ban would devastate his business.

The expat caller told LBC: “We are locked down the first time since then we’ve been working to two years paying staff and everyone and we’ve not single client due to constant lockdowns.

“And then what was it three weeks ago Omicron happened and restrictions got made tighter.

“So we’ve been constantly dealing with clients emails and questions, which is understandable, and then as of today, Macron has closed borders to the English.

“Which means about 90 percent of our turnover will be lost over the Christmas and New Year’s weeks, and however long that goes on.

“We need help, and we won’t get out because the French government has stated that the ski resorts are still open, so that’s not their fault, we should still be able to make money.

“And as an English branch, our workers in England aren’t getting any compensation.

“So we’re gonna have to keep paying that as well as our French workers and we’ve not made money for two years now.

“Which means about 90 percent of our turnover will be lost over the Christmas and New Year’s weeks, and however long that goes on.”