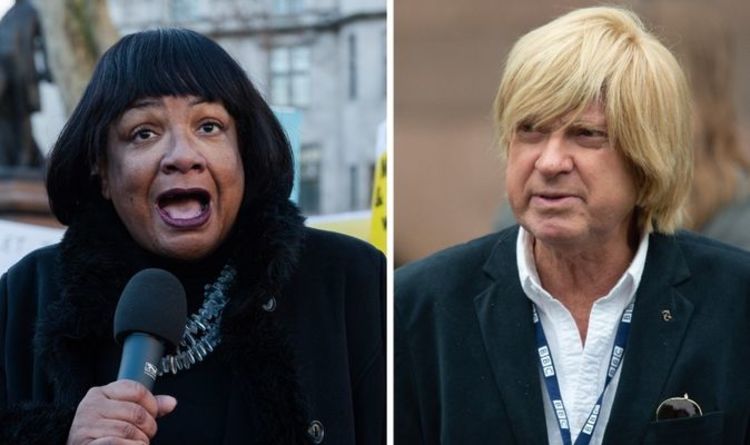 The former Shadow Home Secretary had criticised MP Michael Fabricant on Twitter, writing: “Just watching an embarrassing defence by Michael Fabricant MP of the latest Downing St. party to be revealed.” She added: “Boris must be desperate.” Responding to her comments, Mr Fabricant wrote: “Well at least I can string more than two words together coherently.”

But many Twitter users jumped to Ms Abbott’s defence.

One user, Russell Horton said: “That’s right, she got a Cambridge degree despite not being able to string two words together coherently.”

Richard Emmins added: “I’m not sure you should be lecturing anyone about coherence after this morning’s performance.”

While a third user, Andrew, wrote: “She was able to string more than two words together coherently in the tweet you’re responding to.”

The MP for Lichfield told political correspondent Tom Harwood that the “context” of Downing Street rule-breaking is different from other UK workplaces.

He said: “If Boris has a weakness, its loyalty to people who work for him and loyalty to his friends.

“Now look, you have these people working closely together, in enclosed, stuffy offices – now some of them are really quite small offices – and if they had this drinks party, which I think we now have to assume they did, it was then moving out into the garden to do it.

“No outside people were invited at all, it was the same key workers – don’t forget they were designated as key workers, which has a meaning in law, and that’s something that I know Sue Gray will be looking at – and then they went into the garden for drinks.

“So simply from an epidemiological point of view, there’s less chance of them spreading the disease than in those 18 hours when they were stuffed in the offices together.”

Speaking to BBC News, he added that Mr Johnson held the party because he felt sorry for his staff.

He said: “What I’m trying to explain is that Boris and others felt sorry for people who are working long, long hours and they were simply spilling out from their own offices into a secure garden, which is an integral part of number 10 Downing Street.

“And you know what? I’d rather have a Prime Minister who felt for his staff and all those hard-working people than some cold fish who really couldn’t care a toss about them.”

This came in the wake of further revelations about alleged parties held at Downing Street during lockdown.

Yesterday, it was revealed that Downing Street staff were invited to a drinks party in the Number 10 garden – during the height of lockdown in May 2020 – to “make the most of the lovely weather”.

According to ITV News, around 40 staff, including Mr Johnson and his wife Carrie Johnson, gathered in the garden eating picnic food and drinking alcohol.

Ms Abbott first weighed into the debate over the alleged party earlier today, writing on Twitter: “Yet another Downing Street party during lockdown.

“How long is Boris going to get away with lying about these parties?”

She later added: “If I had known Boris was having all these parties at Downing St. I could have got him a sound system to borrow.”