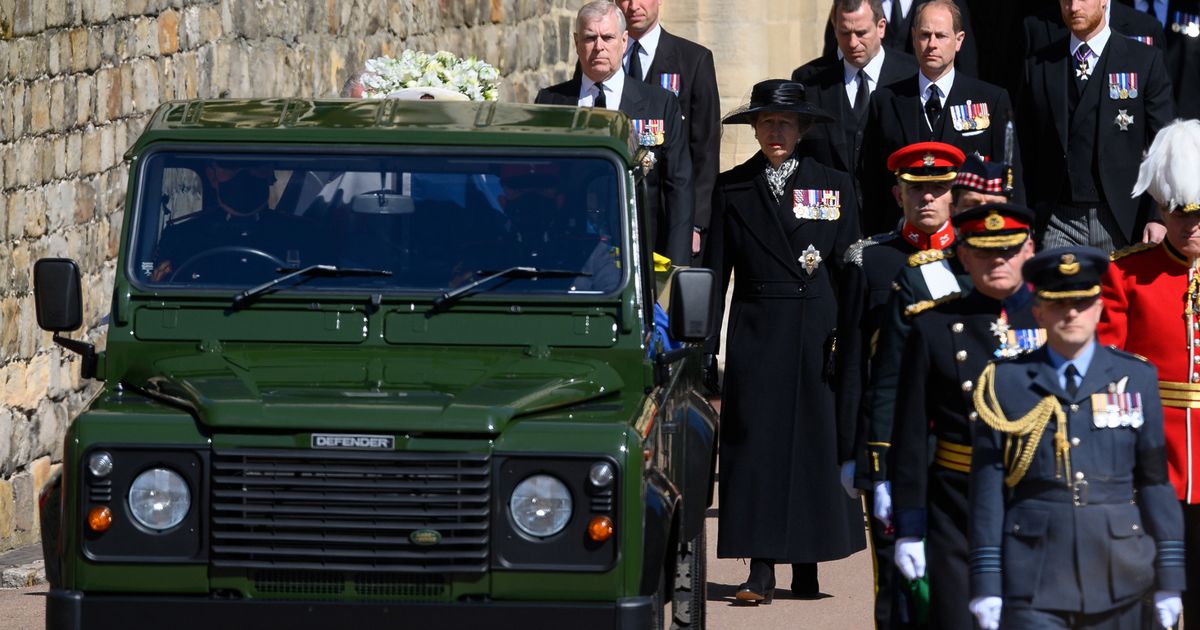 The Duke of Edinburgh reportedly made a lot of plans for his funeral in the weeks leading up to his passing which highlighted his valuable service to the country.

Prince Philip, who was aged 99 when he passed away on April 9, 2021, devoted years of his life to the Royal Navy and being Queen Elizabeth's loving husband and consort.

So, despite saying he didn't want any fuss, he still managed to add secret personal touches to his funeral that were revealed on Channel 5's Secrets of The Royal Palaces.

Prince Philip's custom-built Land Rover hearse started off as an inside joke with the Queen in the 80s but the specially-modified Defender was used to transport his coffin to Windsor Castle to be laid to rest.

Reports say the Duke joked with her majesty when planning his funeral more than 30 years ago, saying "when I'm gone just throw me in the back of a Land Rover".

The Queen's husband of 73 years worked on the project to custom-build the TD5 130 chassis cab for 16 years and saw him request it repainted in military green with special "stops" to secure his coffin in place.

He also designed the open-top rear and only made the final adjustments in 2019.

In the Prince's funeral procession, an empty riding carriage that contained a flat cap, whip, riding gloves and a tub of sugar cubes, paying homage to his passion for carriage driving.

Journalist and author Victoria Murphy told Secrets of the Royal Palaces: "It was never really a big part of his public life. It was a private interest.

"But I think just how important that was to him came to the fore during the funeral as it was also a passion he shared with friends and family."

Following the funeral, Prince Philip's favourite ponies and carriage was passed on to his granddaughter, Lady Louise who shares his love for riding.

During the funeral procession, Prince Philip's coffin was draped with a personal flag that signified his identity.

The flag was quartered with three lions from the Danish coat of arms, the white cross of the Greek flag, an image of Edinburgh Castle and the black and white stripes of the Mountbatten family.

Royal commentator Daisy McAndrew explained: "His standard, his flag reflecting all elements of his personal life, his Greek heritage, his Danish heritage, the Mountbatten family which was so important to him, and finally Edinburgh, as the Duke of Edinburgh were all things he was proud of.

The documentary claims the sound was planned to honour the Duke's service in the Royal Navy.

The longest-serving consort in British history began his naval career in May 1939 before joining the battleship HMS Ramillies in 1940, spending six months in the Indian Ocean, aged just 19.

In 1941, he served on the HMS Valiant in Alexandria and two months later was given honourable mentions for his actions in the Battle of Matapan during the Second World War after spotting an unexpected enemy vessel, later he was awarded the Greek War Cross of Valour.

Philip later rose through the ranks becoming one of the youngest officers in the Royal Navy to be made the First Lieutenant and second-in-command the HMS Wallace.

His active naval career ended in July 1951, the following year he was appointed Admiral of the Sea Cadet Corps, Colonel-in-Chief of the Army Cadet Force and Air Commodore-in-Chief of the Air Training Corps.

Find out more Secrets of the Royal Palaces from Channel 5 at 8.30pm on Saturday.