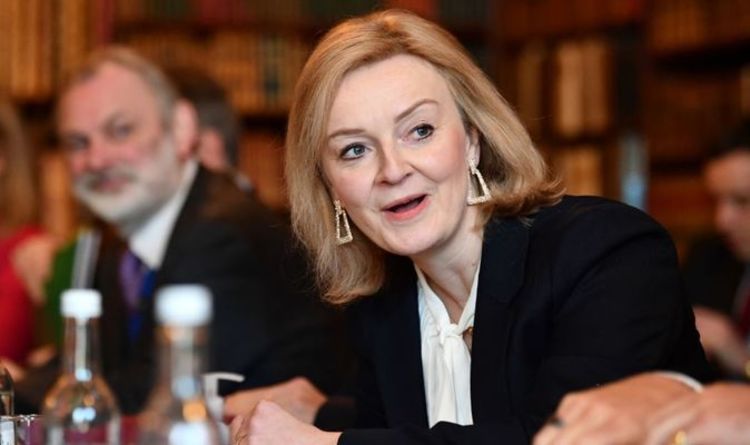 The Foreign Secretary – who took over responsibility for Brexit after Lord Frost resigned last month – held talks with Maroš Šefčovič – the Vice-President of the EU Commission last week. It focused on resolving the protocol – which has sparked anger amid allegations that it is splitting up the UK’s internal market by creating a border in the Irish Sea.

During his tenure, Lord Frost repeatedly threatened to invoke Article 16 – which would have unilaterally suspended the protocol.

This put Brexit Britain at loggerheads with the EU – which threatened to take legal action against the UK if it carried the threat through.

It appears that Ms Truss has taken a more nuanced approach with the EU.

Taking to Twitter after meeting with her EU counterpart, the Foreign Secretary wrote: “Good talks with @MarosSefcovic over the past two days.”

Reacting, Gavin Barwell wrote: “Missed this with everything else going on at end of last week.

“Good to see @trussliz investing time in building a personal relationship and hints that she sees importance of good UK/EU relations to wider foreign policy goals.

Speaking after the talks, Ms Truss said there was “a deal to be done” over the post-Brexit arrangements for Northern Ireland.

In a joint EU-UK statement, the pair said intensive talks would begin this week to deal with the outstanding issues relating to the protocol.

Speaking to the BBC afterwards, Ms Truss “We’ve had constructive talks with the EU.

“We’re now going to go into intensive negotiations to work towards a negotiated solution to sort out these very real issues for the people of Northern Ireland.”

“What I want is a negotiated solution. I think there is a deal to be done. We have had constructive talks over the last day.

“Of course there is more work to do, and that is why we are intensifying the discussions.

“I will be seeing the vice-president again in a week’s time, and I do want to make progress. Clearly if we don’t make sufficient progress we will have to look at the alternatives, but my absolute desire is to get a deal that works for the people of Northern Ireland.”

He said: “I think it is a good thing that the Brexit issues and the protocol issues are back in the Foreign Office in London rather than in a separate unit led by Lord Frost.”