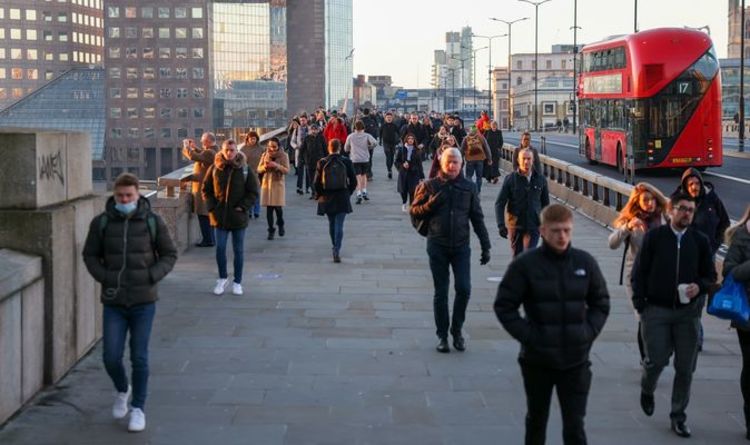 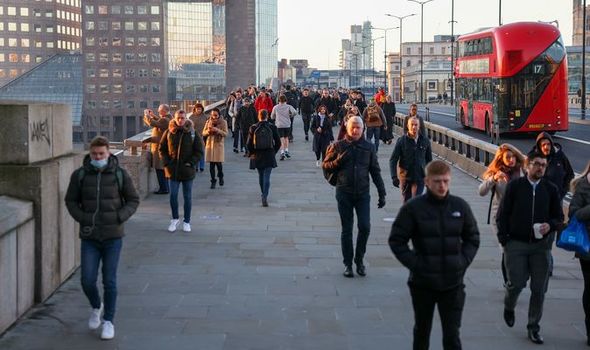 Employment soared by 184,000 last month, despite the Omicron restrictions, while job vacancies have hit a record of 1.25 million. The unemployment rate was 4.1 per cent in the three months to November – just 0.1 percent higher than before Covid struck. The figures come just days after the Daily Express exclusively revealed the UK is the first European economy to bounce back to pre-pandemic levels.

Chancellor Rishi Sunak said the data shows the UK’s labour market is in good shape. He said: “Today’s figures are proof that the jobs market is thriving, with employee numbers rising to record levels and redundancy notifications at their lowest levels since 2006. From traineeships for young people to sector-based work academies for those switching careers, our Plan for Jobs is continuing to create opportunity for all.”

Overall, the number of posts available in the quarter to December was 462,000 higher than in February 2020. Redundancies were also at their lowest since 2006, according to the figures from the Office for National Statistics.

The latest data suggests there was little impact on the buoyant jobs market from the spread of the new Covid variant and tightened restrictions in December. That was in spite of a sharp dropoff in trade for many sectors, particularly the services sector.

Figures also confirmed the end of the furlough scheme in September has not led to the once-feared surge in job losses, with the redundancy rate falling to a record low in the three months to November.

Professor Len Shackleton, of the Institute of Economic Affairs think tank, said: “Today’s labour market data continues to offer a broadly positive picture. Payroll data suggests employment above pre-pandemic levels and continuing high levels of vacancies. Unemployment rates have fallen again right across the UK, with record lows in some regions, such as the East Midlands.”

However, in a worrying sign for the cost of living crisis, wage growth was outstripped by inflation in November for the first time since July 2020. Single month growth in real average weekly earnings was minus 0.9 percent for total pay and minus one percent for regular pay.

The Resolution Foundation think tank said: “Real wages officially began to fall in November, and the current period of shrinking pay packets is likely to get worse before it starts to ease in the second half of 2022.”

Salaries are still above pre-pandemic levels, it was said. Average weekly pay, excluding bonuses, rose to £550 in November compared with £510 in March 2020. In a sign that the hiring crisis and staff shortages may finally be easing, the ONS also said the rise in vacancies had slowed down. But the percentage of “economically inactive” people – those neither looking for or available for work – rose to 21 percent.

Danni Hewson, analyst at financial specialists AJ Bell, said: “This could be tied to the return to education for many young people looking to better their prospects, nervous of setting out on their career during such an unpredictable time. Nerves may also be playing a part in the number of over- 60s choosing to stay in the workplace, some deciding to take early retirement.”

AT THIS time in January many of us might be wavering on our New Year’s resolutions to get fitter or get organised, but for me as the employment minister, I’m standing firm on my resolution to continue to get more people into work.

Yesterday’s jobs figures were an important opportunity to test our commitment and efforts to meet this resolution. This month, building on several months of sustained progress, employment is stable and remains above pre-pandemic levels in every part of the UK.

We’ve been faced with turbulent times throughout the Covid crisis, with households under pressure, but more people are finding work and earning an income – that’s an important achievement which should not be understated.

Predictions early in the pandemic feared unemployment would reach 12 percent but it continues to fall, now at 4.1 percent largely helped by the huge success of our Plan for Jobs.

Furlough kept millions of people connected to their employers. Kickstart has helped more than 113,000 young people into lifechanging jobs. And our DWP sector-based work academies have helped crucial sectors to fill their vacancies with people from all age groups.

Leon, who’s now employed by Marks & Spencer, told me last week what our Kickstart scheme meant to him. He revealed that the scheme had built his confidence from day one, as he worked on the self-service checkout tills and interacted with customers.

Meanwhile, the Office for Budget Responsibility, which independently analyses the UK’s public finances confirmed to MPs earlier this month that our Plan for Jobs had succeeded in preventing mass unemployment.

There is still more to do to help people progress into better jobs and to earn more and that is my next priority. And while we’re investing in building skills so people can move forward, we’re also taking action to help people keep more money in their pockets.

The lowest earners have been benefiting from changes to Universal Credit, which is adding £1,000 more a year on average to their income, and we’re increasing the National Living Wage in April, providing another £1,000 a year for a full-time worker.

To support families back to normal, we’re using a wide range of measures and it’s clear that our thriving jobs market is central. It offers people purpose, progression and prosperity.