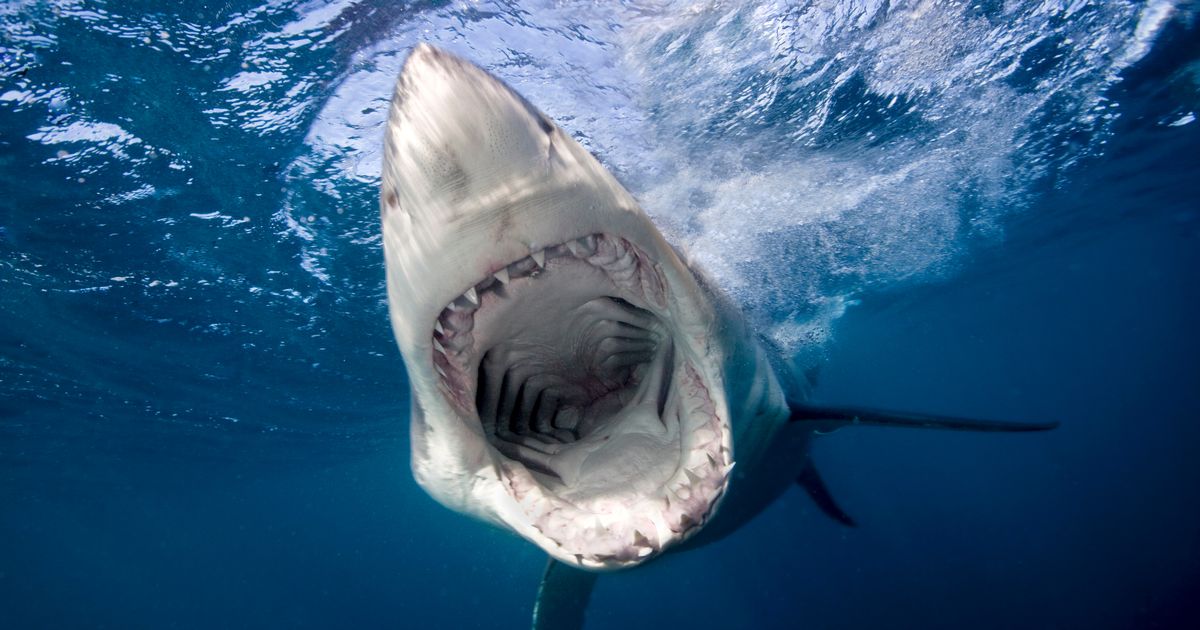 Since the release of Steven Spielberg's Jaws in 1975, the movie's haunting music has become a kind of metaphor for anything ominous or potentially dangerous.

But back at the beginning of the 20th century people didn't fear sharks, and even thought that they didn't bite swimmers.

That was until one bloody two-week period when four people along the Jersey Shore in the US were killed by a great white, starting the shark panic that would inspire Jaws, and terrify people to this day.

The anniversary comes at a time when a monster 450kg great white shark nicknamed 'Ironbound' lurks the same coast of New Jersey.

It was the mauling of 25-year-old Charles Vansant, who bled to death in a beachfront hotel in New Jersey after being pulled from the water, that signalled the early days of the panic.

Five days later, bellhop Charles Bruder, 27, was killed during an afternoon swim along the Jersey Shore.

Beachgoers gathered around his legless remains, with tension building in the area.

Just a week later, people on Main Street in New Jersey were greeted by the sight of mud-covered young boys running down the street screaming after their friend, 10-year-old Lester Stilwell, was eaten alive when swimming in Matawan Creek.

Even though three people had died by shark at this point, some were still sceptical. They thought Stilwell, who was epileptic, had drowned.

Newspapers at the time of course reported on the shark attacks, but people didn't believe it because they quite simply thought sharks didn't bite people.

However, that soon changed when Watson Fisher, a tailor, went into the creek to look for Stilwell and he was attacked as well. He later died of blood loss.

And as if the sharks in the area were trying to send a message, just thirty minutes later, a beast bit 14-year-old Joseph Dunn’s leg.

The shark panic officially started. That night, local men tossed sticks of dynamite into the creek.

A cabinet meeting was called by then-president Woodrow Wilson.

The White House agreed to give federal aid to “drive away all the ferocious man-eating sharks which have been making prey of bathers”, according to a July 14, 1916 article in the Philadelphia Inquirer.

Eventually, an eight-foot juvenile great white shark was pulled from the New Jersey waters and its stomach contained human remains.

This new attitude marked a huge shift from blase, and dangerous, attitudes to sharks and their capabilities.

Millionaire and athlete Hermann Oelrichs was so sure that the predators didn't bite humans that he offered $500 ($12,000 or £9,800 today) to anyone who could prove him wrong.

Once, he even jumped in the water with a shark to settle a $250 bet with guests at his seaside home, according to an 1891 Pittsburg Dispatch article.

The beast swam away and Oelrichs later repeated this stunt on his yacht.

His stunts, and science, solidified the false narrative around sharks.

According to Michael Capuzzo’s 2001 book on the attacks, Close to Shore: The Terrifying Shark Attacks of 1916, scientists at the American Museum of Natural History in New York cited Oelrichs as scientific evidence that man-eating sharks did not exist.

Orcas and even sea turtles were blamed for Bruder and Vansant's deaths and shark attacks were often dismissed as fisherman’s tales.

George Burgess, director of the Florida Program for Shark Research and curator for the International Shark Attack File, said that as the bites continued, it eventually became obvious that sharks were attacking.

"The usual order of things is usually fear, followed by denial, followed by revenge, and then followed by some rational or scientific approach to the problem. It’s a timeless and cultural-ist reaction," Burgess told National Geographic.