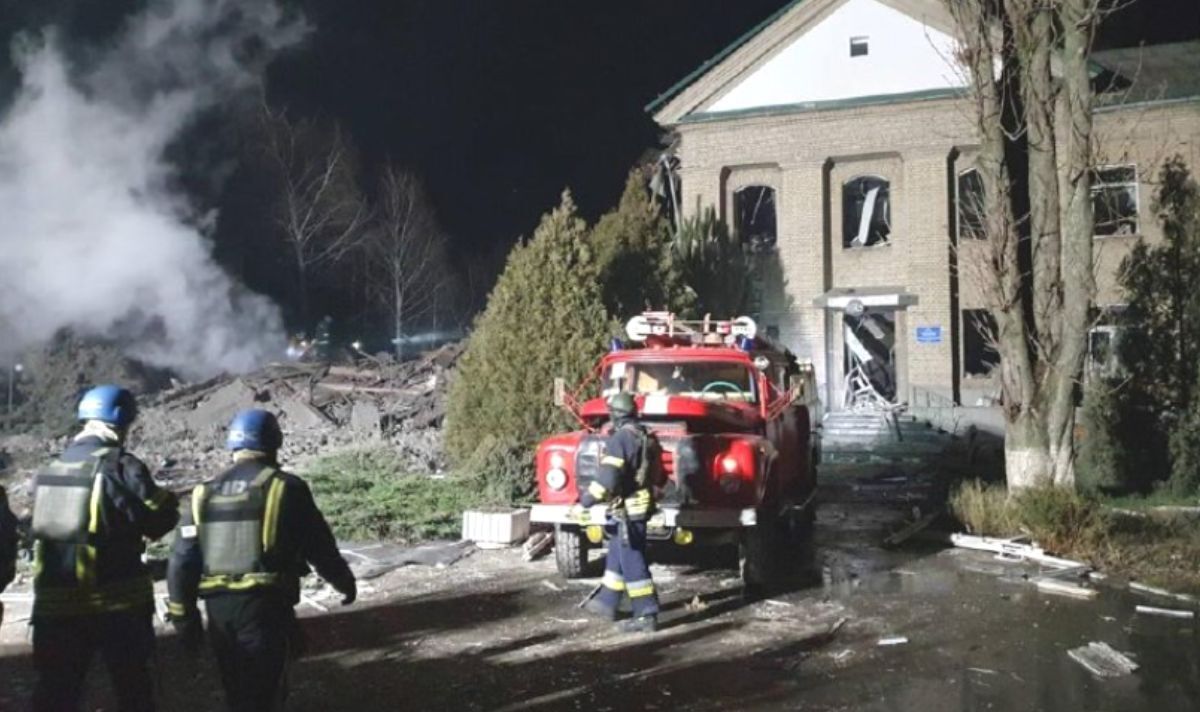 Ukrainian authorities have reported a Russian missile attack on a hospital close to the Kremlin-occupied Zaporizhzhia city. Officials declared the missile struck the maternity ward of the hospital, killing a newborn baby boy. The regional governor described Moscow’s military as “monsters” and said the community had been engulfed by grief following the death of the infant. The news comes after Russia was said to be “playing with fire” by targeting the Zaporizhzhia region, which hosts Europe’s largest nuclear power plant.

Speaking from Kyiv, BBC correspondent Jessica Parker reported: “The maternity ward where the missile is said to have struck is part of a larger hospital in the town of Vilniansk just east of Zaporizhzhia city and not far from the frontline.

“Overnight, the region’s governor said rescuers were working on site. Emergency services reported that there had been only one woman in the unit at the time with her newborn baby, as well as a doctor.

“Authorities said that while the mother and doctor were rescued from the rubble, the baby boy – who was two days old – died.”

Oleksandr Starukh, governor of the Zaporizhzhia Oblast, confirmed the tragedy on Wednesday in a message on Telegram.

“Grief fills out hearts – a baby who has just appeared in the world has been killed.”

He confirmed emergency services had worked through the night to rescue survivors from the building, which is believed to have partially collapsed following the missile strike.

The attack in Vilniansk comes after an earlier Russian missile attack on a maternity hospital in the now Kremlin-occupied port city of Mariupol.

Read more: Putin ‘fearing for his life’ as Russia has ‘no forgiveness’

In March, the Russian air strike on the hospital wounded at least 17 people and triggered global outrage towards Moscow’s campaign of violence.

At the time, the bombing came as humanitarian corridors were being established within Mariupol, following strained negotiations between international powers, to allow civilians to flee the area.

Writing on Telegram following the strike in Vilniansk, President Zelensky said: “The terrorist state continues to fight against civilians and civilian objects.

“As a result of a missile attack on the maternity ward of Vilnyansk hospital, an infant died and a woman was injured. There are probably still people under the rubble.”

In the days leading up to the Vilniansk attack, the Kremlin had already been warned it was “playing with fire” by the UN’s nuclear energy watchdog.

On Sunday, The International Atomic Energy Agency, which has experts stationed in Zaporizhzhia to monitor the nuclear power plant, reported shelling had damaged some buildings and equipment within the facility.

The IAEA later confirmed that there were no immediate safety or security concerns and essential equipment had emerged unscathed from “intense and severe shelling”.

Head of the IAEA Rafael Grossi said: “This is a major cause of concern as it clearly demonstrates the sheer intensity of the attacks on one of the world’s largest nuclear power plants.”