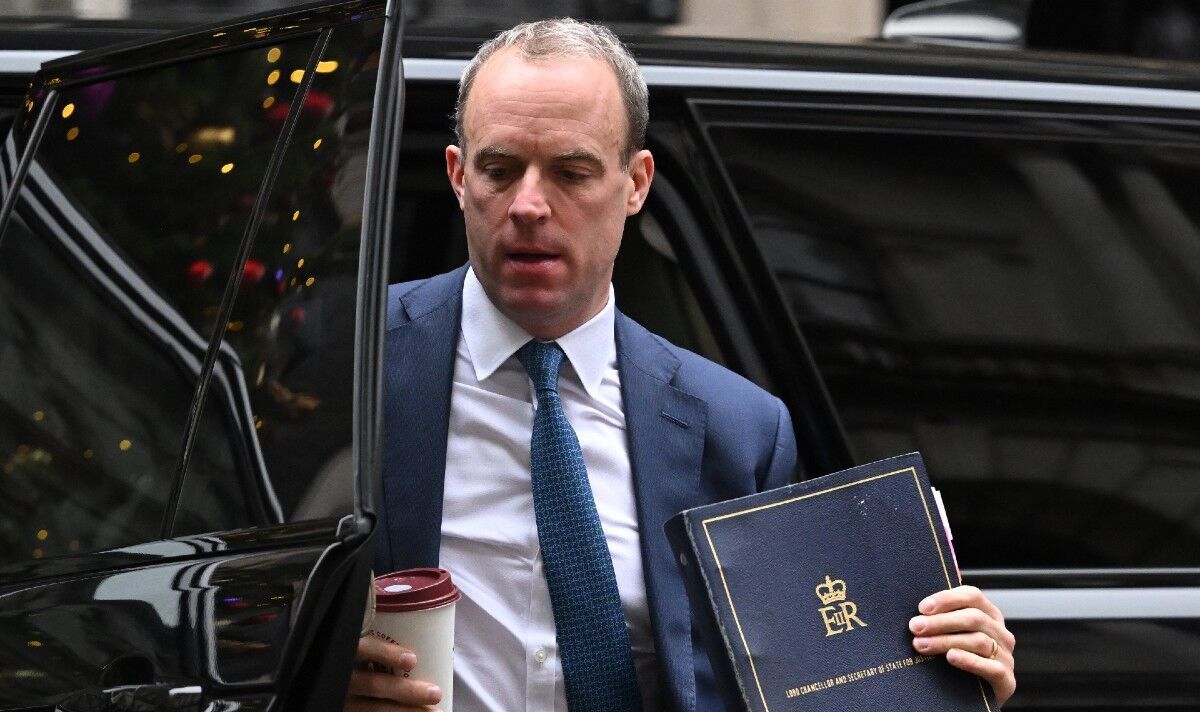 Dominic Raab has been nicknamed “Dumbbell Dom”, as the minister reportedly demands that at least an hour a day is blocked out in his ministerial diary for a trip to the gym. Mr Raab visits a private gym in the basement of the Ministry of Justice. But officials have complained that they are forced to work late into the evening in order to accommodate the minister’s fitness routine, which – according to the Mirror – takes place in the middle of the working day.

But a source close to the Deputy PM said he chooses to use the gym instead of taking a lunch break.

They insisted he works from 7am and continues late into the evening, noting that the Ministry of Justice gym is open to all staff who work in the building.

Mr Raab is also facing a number of allegations of bullying, with an independent investigation currently underway.

Last week it was revealed that a further complaint has been brought against the Deputy Prime Minister, taking the total number of complaints to three.

The complaint came from the Department for Exiting the European Union, when he was Brexit Secretary in 2018.

She said it was received by the Cabinet Office on November 23th.

The latest complaint comes in addition to two pre-existing complaints, one from his time in the Foreign Office and another from the Ministry of Justice.

But the Prime Minister’s spokesperson confirmed that Mr Sunak still has “full confidence” in Mr Raab.

She added: “There is now an independent investigation that is ongoing.

“It is being led by someone with extensive experience in this area. We’re not going to preempt or prejudge that process.”

Senior lawyer Adam Tolley KC is leading the investigation into the complaints.

In November, Mr Raab asked Prime Minister Rishi Sunak to launch an investigation into his own conduct after the first allegations about his behaviour towards staff emerged.

Downing Street said the report will be published in a “timely way”.

While the investigation is independent, any final judgement on whether Mr Raab was in breach of the ministerial code will remain with Mr Sunak.

Mr Raab has denied any allegations of bullying, insisting he “behaved professionally at all times”.

The Justice Secretary and Deputy PM said he looks forward to dealing with the complaints “transparently rather than dealing with anonymous comments in the media”.

Labour deputy leader Angela Rayner warned the investigation must not be a “whitewash”, calling on Mr Sunak to expand its scope to cover other allegations about Mr Raab’s behaviour.

She said: “This Conservative government has a troubling track record of brushing serious misconduct under the carpet. Their refusal to act on findings against [former home secretary] Priti Patel previously led their former ethics chief to quit in disgust.

“A temporary stop-gap investigator, appointed in a panic, with an absurdly narrow remit is not a solution to dealing with the flood of allegations of ministerial misconduct now requiring investigation.”